Spring Means the Return of Poison Ivy–Homeopathy Can Help! 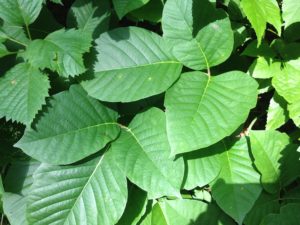 Rhus Tox, sometimes known as Poison Ivy, with the smooth leaves. Leaves of three, let it be.

Now that the snow seems to be past us, we can expect to see Poison Ivy sprouting up soon.

Did you know that Poison Ivy is considered nature’s Band-Aid?  The reason for that is it tends to grow where the earth has been scraped.  Behind my house is a paved trail, and on the other side of that trail is park land.  Along the edge of the park land is Poison Ivy.   A couple years ago, the city came and dug it up.  Guess what? Two years later, it was worse than ever.  Nature’s Band-aid indeed.  Keeping us out of the forested Park Land. Preventing people from trampling on the cuts caused by the scrapers which moved the earth.

The best way to prevent an allergic reaction to Poison Ivy is to recognize it.  The picture to the right or above (depending on where you are reading this) is the poison ivy which grows on the path behind my house.  Specifically, pay attention to the plants with three leaves which have smooth edges.

But sometimes, it is unavoidable.  For example, if your pet rolls in it and rubs up against you, you may then respond to the urushiol oils in the leaves, especially if you are particularly sensitive to Poison Ivy or Poison Oak.  If you think you are having a systemic reaction which has gotten into the blood stream, that is not how it spreads.  It spreads by scratching and getting the oils on the skin.  If you keep getting new breakouts, you are probably getting it from your pet.

One of the worst reactions to Poison Ivy is when someone digs it up, lets it dry and then burns it.  It can be serious at least and fatal at worst for highly sensitive individuals.  Interestingly, homeopathic poison oak, or Rhus Tox, is an asthma remedy.

To be sure to get the oils off your skin, washing with Fels Naphtha soap in the shower is the best solution.  Do not take a baking soda or oatmeal bath until you are certain all the oils have been washed off!

But poison ivy and poison oak reactions can be helped by homeopathy.  Before you run out and purchase Rhus Tox, please note the following:

Anacardium Orientale:  This remedy is poison sumac and is a close relative of Rhus Tox and they have similar symptoms.

Rhus Toxicodendron (Rhus Tox):  This is homeopathic poison oak or poison ivy (There is some dispute which it is).  But not everyone needs it when they get Poison Ivy.  In fact, over the years, I have only recommended it a couple of times.

Apis mellifica:  Homeopathic bees.  This remedy is quite the opposite of Rhus Tox.

The remedies readily available in the store generally can be purchased in a 30C potency.  Take a dose 2-3 times a day.  If the symptoms change, or it doesn’t help after 2-3 doses, switch to a different remedy.

There are many other Poison Ivy remedies (44 total), but these are the most commonly used ones.  If none of these remedies seem to describe your condition, call Lotus Homeopathy, Inc., for help finding a better match.

Many thanks to clients over the years who have called and several books in my electronic homeopathic system for providing this information.