Do You Have A Built-In Sentinel?

I remember the first time I encountered someone who today would likely have a diagnosis of PTSD. 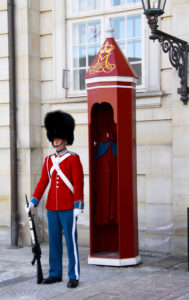 She was an older woman I met on a volunteer trip in the late 1980’s.  She commented about how difficult it was to sleep because she had a “built-in Sentinel.”  Something about her was always causing her to be on guard, to be alert to her surroundings.

According to Dictionary.com, a Sentinel is “a person or thing that watches or stands as if watching.” Also, “a soldier stationed as a guard to challenge all comers and prevent a surprise attack.”  I think the second definition was the one to which she was referring. That is also the appropriate definition for the “Hyper-Awareness” experienced by people with PTSD.

Always being on guard is a very common symptom of PTSD and CPTSD. This is especially true in military vets with PTSD, but also true in people who have been victims of abuse, and police officers.  In Homeopathy, we call this symptom Watchfulness.  There is also a symptom with more remedies that are associated with it called Suspiciousness, mistrustfulness.  Another such symptom is Delusions, Surrounded By Enemies.

What Types of Remedies Are Always On-Guard?

Just a brief review, homeopathic remedies are made from Plants, Minerals and Animals, prepared in a very particular way to make them safe an effective.

The sources of remedies that consistently show up in these three symptoms mentioned above are Snakes.  This makes sense.  Think about rattle snakes.  They are always watching.  They let you know when you get too close.  The person who needs a snake remedy is always watching, always aware of his or her surroundings too.  Common accompanying symptoms of snake remedies are issues with blood, bleeding, one sided symptoms and dreams or fear of snakes. 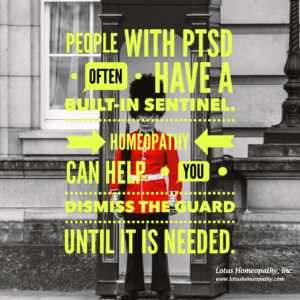 In a larger scope, the story behind animal remedies is about life and death, because that is generally the life of being an animal, especially one that is not domesticated. For example, remedies made from Rats also show up in these symptoms.  While rat remedies don’t align as closely with PTSD as Snake remedies do, watching the movie Ratatouille or reading Charlotte’s Web (Templeton the Rat) gives you an idea about what those remedies are like.  There is always a risk of getting caught and killed, and further, no one cares if you get caught or killed. Accompanying symptoms are stealing and hoarding.

Do you Need a Snake, Rat or a Plant or Mineral?

Not everyone with a built-in Sentinel needs a snake.  There are plants and minerals that cover those symptoms too.  The only way to know for sure is to work with a homeopath on your PTSD symptoms.

Once you have the right remedy, the Sentinel can retire, and you can feel more relaxed in your surroundings.

If you are interested in knowing if need a Plant, Mineral or Animal Remedy for your PTSD or CPTSD symptoms, contact us at Lotus Homeopathy. Schedule a Complementary Consult and find out if you can be helped.  If you aren’t a member of our Facebook Group Healing PTSD Naturally, join now!