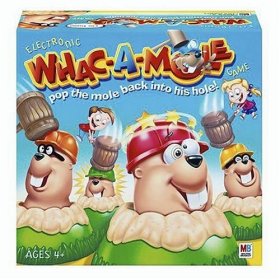 Suppressing symptoms becomes a game of Whack A Mole

Tinkering with the food chain is but one way that man tries to fool mother nature.  Medicine is another.

Let me begin by saying that I think there are definitely times where western medicine and pharmaceuticals are necessary.  However, there seems to be an attitude in the philosophy (if one can call it that) of western medicine that we have a shortage of antibiotics or antidepressants or Lipitor in our bodies.  The problem with this view point, in addition to it being a fallacy, is that it fails to get to the root of the problem.

I remember first hearing about the idea of a “Chemical Imbalance” in the brain used as an explanation for a particular health issue experienced by a friend.  The very first thought I had was, “Well, why is there a chemical imbalance?”  That question, of course, has never been answered to my satisfaction by Western Medicine.  The history of that explanation is that in the 1950’s antidepressants were accidentally discovered when a drug designed to help Tuberculosis made the patients unusually happy.  Other unintended discoveries made researchers conclude that if one could improve with chemicals that there must be a chemical imbalance.

If it were true that adding chemicals to improve someone’s mood meant that there was a chemical imbalance, then one could say that if drinking alcohol made someone jolly, there must be deficiency of alcohol (or other chemical easily replaced with alcohol) present in that person.  Although there could be a grain of truth to the idea, it is a gross oversimplification.  And it still doesn’t answer the question of Why?

What does it mean to get to the root of the problem?  One thing I know for sure is that it does not mean balancing the chemicals out with other chemicals.  Imagine, if you will, a pole with vines growing on the pole.  If you don’t want the vines on the pole, the logical thing would be to cut the vines down.  Of course, they would keep coming back.  You could cut the vines down together with the pole.  That would be a little like doing surgery to remove a body part—say a hysterectomy for excessive bleeding.  But the vines would just grow on the ground with a vengeance, perhaps doubling in number because the stems were cut.  That is like getting a stronger new disease when the old expression of the dis-ease has been removed.  So rather than excessive bleeding, perhaps you develop fibromyalgia over time.  To rid the problems of the vines growing, you need to dig them out by the roots.

To do anything but solving the source of the problem is like playing a game of Whack A Mole.

It is well known that Western Medicine suppresses symptoms.  Physicians will agree with that.  What is not agreed on is whether this is a problem.  Eczema is one of the expressions of dis-ease that is commonly suppressed, frequently with cortisone cream.  And if you trick the skin into not expressing that dis-ease, the body will express it elsewhere, usually in the lungs.  Chinese Medicine doctors have known about the relationship between the skin and the lungs for thousands of years.

I once had a client who sought help with her asthma.  A good remedy for her presented itself clearly.  She took the remedy.  Mid way between appointments, she called me to report that she now had a ring of warts on her finger.  She had had them frozen or burned off (I can’t recall which form of suppression worked for her) many times and they had finally stayed away.  They had returned quickly upon taking the remedy.  Her asthma was gone.  One stronger dose of the same remedy a few months later removed the warts as well, this time without any asthma and no Whack A Mole.

There are many studies which confirm that tricking the body has consequences.  As long ago as 2000, there were already 6 studies confirming the increased incidences of allergies and asthma in children that had been received the DTP and Tetanus vaccines versus those who had not.  In fact, they were 50% more likely to develop this dis-ease.  Conversely, The Journal of Allergy and Clinical Immunology reports that when a parent chooses good nutrition, such as giving their child nutrient dense food like raw milk to prevent acute illnesses studies show a DECREASED incidence of asthma and allergies.

Many people will argue that antibiotics are not suppressing illness because they actually kill the cause of the disease—the germ.  It is getting to the root of the problem, they claim.  Alas, it isn’t true.  Germs, like Real Estate, rely on location, location, location.  Many pathogenic bacteria are found in perfectly healthy people.  You have to be dis-eased before you can become diseased.  Even Louis Pasteur recanted his research on germs.  On his death bed he is reported to have said, “Bernard was right; the pathogen is nothing; the terrain is everything.”  This is why frequently children with ear infections and adults with sinus infections end up on a cycle of antibiotics from which it is hard to extract oneself. (Check out the Wellness Directory of Minnesota.  http://www.mnwelldir.org/docs/history/biographies/louis_pasteur.htm).  The Antibiotics do nothing to change the terrain.  Too many antibiotics and the game of Whack a Mole is on once again, presenting itself as yeast infections and digestive disorders and recurring infections.

Changing the terrain?  That is a subject for a future blog…