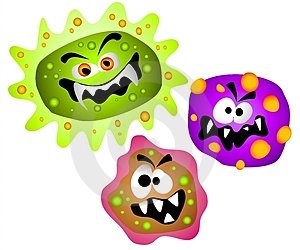 Somehow, a fear has developed about Acute Illness.  I’m sure that it was borne out of history, when people used to die more frequently from acute illnesses—fortunately, good hygiene and sanitation has made this less likely. The settlers brought over small pox to America and killed the natives.  In turn, the Natives gave the European settlers syphilis.  What a trade.  An acute illness (small pox) for an acute illness which turns chronic (syphilis).  We’ve been trading acute illnesses for chronic ones ever since.

First it is important to explain the difference between Acute illness and Chronic illness.  An acute illness is something like a cold or an ear infection.  A chronic illness might be arthritis or heart disease.

Another interesting distinction between and acute and chronic illnesses is that an acute illness actually strengthens your vitality.  A chronic illness only continues to make your body worse.  Have you ever really felt good after having been sick?  I have.  I recently had a homeopathy client report a similar experience to me.  Perhaps acute illnesses are a way for our body to rid itself of chronic dis-ease.

A chronic illness will take a break when an acute illness appears.  When my son was younger, he developed a bad cough.  His constant stomach aches, which we later figured out were caused by a gluten intolerance, went away for two weeks without a change in diet and returned when the cough disappeared completely.  Some people who are seriously chronically ill cannot even produce an acute illness.

Over the years observant parents have noticed that when their child produces a relatively high fever, the episode is frequently followed by a growth spurt.  Because no one has ever explained WHY this happens, it is largely ignored.  Perhaps it is necessary to grow.

And how often do we fool mother nature by suppressing the fever?  If you call a nurse line when your child is sick with a fever, you will always be told to give Tylenol.  Fevers are good.  Why would you suppress them except for a seizure?  Your body generally produces the fever it needs to get over the bug that is present.  If you are uncomfortable with the fever, try homeopathy instead.  It doesn’t suppress a fever, but will make you comfortable.  I was given a book for a baby shower.  It was a western medicine book which was divided by disease name and then told under what conditions you should call the doctor immediately, within 24 hours, or not at all.  It was a really helpful book for a new mother.  It did say not to give your child fever suppressants (and not just aspirin) for certain illnesses because it actually resulted in a longer time for the disease to go away.

Since nature has given us acute illnesses, there is a reason that we get them.  For children, it is pretty clear that they need to exercise their immune system.  Studies have been done which reveal that when parents keep the house too clean, kids don’t develop a strong enough immune system to fight off the bad boys when they come around.  In fact, some believe that it is a source of autoimmune disorders, asthma, and allergies, because the body doesn’t know what needs to be fought off and what doesn’t.  So the body over reacts—which is what all of those diseases are about:  over reaction.  My house is not a shrine to cleanliness by any stretch, and BONUS, I grew up on a farm, so by all accounts, I’m good to go. Here’s a funny take on the whole issue of the exposure to germs:  http://www.wisebread.com/germs-dirt-bacteria-infection-immune-system-antibiotics-disease.  In fact, a study published by the New England Journal of Medicine in 2000 showed that children exposed to a whole variety of germs and infections were less likely to develop asthma and wheezing by the time they are six years old.

But what if children are introduced to the germs via a vaccination?  Well, vaccinations are one way to fool mother nature, so you end up with the same result; that is, children who are vaccinated are more likely to have allergies and asthma than those children who are not vaccinated.  (See an earlier blog for more discussion:  http://woodbury.patch.com/blog_posts/its-not-nice-to-fool-mother-nature-part-2 .)  So clearly, it is a fine line that we need to tread to make our lives healthy, but not be too miserable in the process of getting healthy.  We don’t want to trade an acute illness for a chronic illness, but we don’t want to be acutely ill so badly that we cannot recover from it.

Our unwillingness to embrace the value of an acute illness is a contributor to the rising cost of health care in this country. People take their children or themselves to doctors when they have acute symptoms that our bodies are perfectly capable of managing without outside intervention.  Our demand for results NOW ends up costing us in the end with more chronic illness because we cannot bear to miss a moment being sick, when perhaps we need to just slow down for a couple days.  Instead, doctors cave to requests for antibiotics when the cough is viral.

No one likes to be sick (I suppose that really isn’t true), but sometimes it is necessary.  There are ways to become sick less often and for shorter periods of time.  More on that later.