Homeopathy vs. Therapy: What’s the Difference?

There is a saying in the world of therapy that “insight is the booby prize of therapy.”  This means, of course, that now that you have insight, what are you going to do about it. Sometimes it just makes you angry! Or sad. 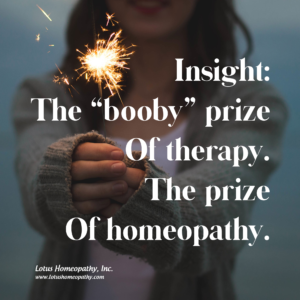 Well, Insight is the prize of homeopathy.  One of many prizes, actually. For some people, it’s a bonus!

Don’t get me wrong.  Therapy is important.

According to Barna, four in ten Americans have gotten counseling at some time in their lives. Anyone who has worked with a therapist knows how helpful it can be in developing coping skills, know what is healthy in relationships, offer suggestions on how to deal with difficult people in your life, give advice on what to do in a situation, etc.

But the problem is that you spend your life managing your symptoms, rather than eliminating the root cause of the problem.

What Does Homeopathy Offer?

Homeopathy offers a path to eliminating the root cause of the problem.

A homeopathic intake is often the first time people have been asked the questions that bring up their inherent insight.  Countless times people have said to me, “Wow, Great Question!  I have never been asked that before.”  This comes from people who have had counseling and people who haven’t.  So the intake is an important part of the insight people gain from homeopathy.

But the lasting insight comes from the remedy.

As I have mentioned in previous blogs, homeopathy deals with delusions.  Let’s say, for example, you feel badly about yourself because your whole life, you were told by a parent that you weren’t worthwhile. Perhaps they reinforced that with some physical punishment. Naturally, you would come to believe that to be true about yourself.

Many sessions with a counselor will help you believe in yourself more.  But there will always be that underlying delusion that you will be managing the rest of your life.  Sometimes it will be easier than others.  But there will be triggers, maybe during the Holidays, and it will come back.

What Will Homeopathy Do? 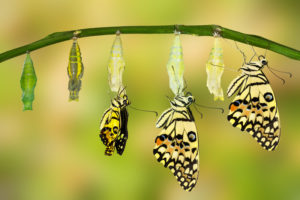 Homeopathy literally changes the way you see the world and yourself in the world.

Is it going to change your past?  No.

But it can change the way you feel about the past and the way your past impacts you. We all remember things we used to believe as a child and now as an adult we can’t believe we used to think that way. That’s what homeopathy does for people as well.

I recall a long-ago client who did not get along with her mother AT ALL.  She never really had because, while her mother didn’t physically abuse her, she was just not nice; that is, she was emotionally abusive. And very controlling.  My client was very nice.  Perhaps too nice. She was over responsible for other people.

I selected a remedy for people who have been abused and are too yielding to what other people want.  The result was that she began to get along with her mother, first, phoning to ask for advice and then actually moving to another state to live near her mother and father.

What was going on?  How did the remedy change that?  After all, I didn’t give a remedy to her mother.

By taking a homeopathic remedy, my client changed her viewpoint of herself.

The delusion she had of herself as basically a doormat to her mother vanished. (Her words) She didn’t need to put up with her mother’s controlling behavior and she didn’t have to be responsible for absolutely everyone else.  She gave up having to be in control herself.

Bottom line:  The remedy changed her.  And when you change yourself, the world around you changes as well.  She changed herself at a very fundamental level.  She didn’t just get the mental equivalent of getting her hair cut and her teeth fixed.  This was really fundamental change of the core of who she believed she was.

Do People Realize They Have Changed?

Do they develop the insight?  Some do.  Some don’t.

Some can’t even remember that they even had a problem. Fortunately, I take copious notes so I can go back and remind them of what they were like when they first came in to see me.  “Did I really say that?” they will ask.

In summary, the difference between the two?  Therapy gives you skills, but you have to keep managing your symptoms.  Homeopathy gets to the root of the problem, and when the underlying symptoms go away, your behavior changes.

If you want to see if homeopathy can help you get to the root of your problems, schedule a Complementary Consult.  If you want to get started changing your life, schedule an Initial Consultation.

Do you have PTSD or CPTSD?  Have you tried therapy but it just hasn’t worked, regardless of diagnosis?  Schedule a First Appointment today and start getting to the root of your problem.