Since we are finally able to come up for air, literally, after a year’s worth of a pandemic, it bears repeating that there are many ways to improve your health naturally. The most common ones are well known.  In this article, I hope to include some less well known, but nonetheless effective, methods of improving your health naturally.

#1  Limit your Sugar to Avoid and Recover From Acute Illness

Did you know that consuming 100 grams (roughly 4 ounces) of sugar in the form of glucose, fructose, sucrose, honey or orange juice can significantly reduce the ability of white blood cells to destroy foreign particles and microorganisms?  It’s true, according to the Journal of Clinical Nutrition. 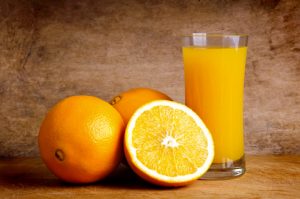 Orange Juice might not be as good for you as you think–especially when you have a cold!

The effects begin within 30 minutes and last for over five hours.  It typically includes a 50% reduction in the ability of white blood cells to destroy and engulf foreign particles two hours after ingestion. We have been taught to take Vitamin C when we are sick, and it shortens the duration of the common cold.  It is a much better choice than Orange Juice. If you want to get off the couch more rapidly when you have a cold or the flu, do not consume sugar!

Alcohol is highly refined sugar.  So although it has a different impact on the body, it is best to avoid it, mostly, especially in the winter when we tend to be more susceptible to getting sick.

#2  Sugar is the Enemy for your Overall Health 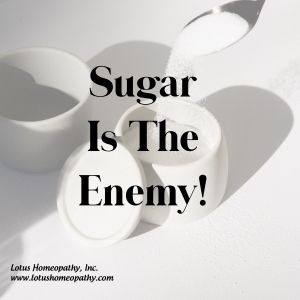 Do you know why people get fat?  I didn’t really either, until I read Gary Taubes book Why We Get Fat.  Most fat cells float around the body in the form of Essential Fatty Acids. These EFA’s can enter and leave fat cells at will. But when you eat sugar (sucrose), the EFA’s bind together within the fat cells in groups of threes within the to make Triglycerides.  Once they have bonded, they are too big to leave the fat cell.  The more sugar (and simple carbs) you eat, the larger your fat cells get.

Sucrose is different than fructose (fruit sugar) and alcohol, and has a different impact on the body, but all can cause weight gain (especially beer) resulting in the following negative effects:

It isn’t always how much you eat, but what you eat that determines overall health.  Sugar is the enemy. Avoid it to improve your health.

Homeopathy helps heal your symptoms.  Western Medicine suppresses symptoms.  To be clear, there is no denying the fact of suppression by practitioners of conventional medicine.  They just don’t happen to think it is problematic. I disagree.

I often hear people complain that when they tried having their warts burned off at the doctor’s office, or using duct tape, or OTC drops to get rid of those embarrassing eruptions, they just keep coming back.  I always say, “That’s good! That means you are healthy and your body refuses to be suppressed!”

Symptoms aren’t the problem.  They are an indicator of something deeper. Suppressing symptoms drives them deeper, setting up the body and the vital force for further mistunement. Dis-Ease, expressed by the symptoms becomes Disease. 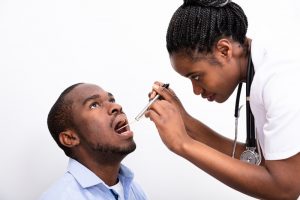 One of the most common suppressed symptoms is a strep infection, commonly treated in recent decades with antibiotics. Although Antibiotics have most definitely saved lives, they have also caused suppression.  At some unexpected moment in life, the dis-ease which allowed the streptococcus to flourish will return, generally in the form of inflammation and pain, often called rheumatism. It can also appear as PANDAS. Anyone who has a history of recurring streptococcus infections—often seen as having had scarlet fever or had their tonsils out—is at risk of this dis-ease reappearing.

If you find yourself with an infection of some sort, schedule an acute care consult to get a well matched homeopathic remedy so your body can heal itself and the infection. If you must treat with antibiotics, do so.  Then, when you are done with the antibiotics, schedule a complete intake to heal the dis-ease that was underlying the infection.

To read more about suppression, check out item #5 in this previous blog post.

#4  Utilize These Natural Products When Needed, Rather Than OTC Conventional Medicine

Rescue Remedy—Rescue remedy is a combination of five Bach Flower essences that can be taken for occasional stress and anxiety.  I recall taking it when I had to play piano for my then-grade-schoolers choir concert. If there is something causing unease regarding an upcoming test, for example, that would be another reason to use it.  Its uses are endless.  It is readily available, safe, and has been around for decades.  It will not stress your liver or kidneys like a glass of wine will if you are feeling restless or stressed.

I recommend the Helios Basic 36 kit for my clients.  It comes with 36 of the most used remedies and BONUS, it has a little booklet that is included so you can help yourself.  The booklet is very well-written.  In fact, I like it so much I wish I could say I wrote it! Having a kit means you can get started on your own.  (Full disclosure:  I do NOT receive any money for promoting these kits. Proceeds do go towards promotion of homeopathy in Europe.) 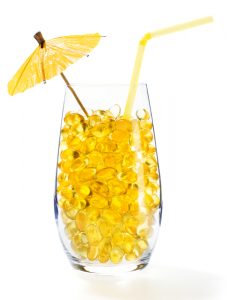 Commonly recommended approaches include making sure that you get enough Vitamin D, C, and Zinc.  Your doctor can help you by doing a blood test to see if you are getting adequate Vitamin D.  With summer approaching, getting Vitamin D is pretty easy. Most medical web sites agree that somewhere between 10-30 minutes in shorts and a tank top in the sun, 3 days a week should do it for lighter skinned people. Darker skinned people may need more exposure. Winter, especially in MN, is when you need to be concerned about supplementing Vitamin D.

The benefits of Vitamin C are well-known.  Vitamin C protects important, irreplaceable molecules in the body. These include proteins, fats, carbohydrates and DNA/RNA. Free radicals (a very reactive atom or molecule which often has an unpaired electron) and Reactive Oxygen Species (highly reactive chemicals that can cause damage in the body) are generated during normal metabolism, but also through exposure to toxins and pollution and can damage those molecules mentioned above. Vitamin C protects them.

Linus Pauling is well known for his 1954 Nobel Prize for research into quantum mechanics to understand and describe chemical bonding. He is also well known for his research into Vitamin C. Before his death in 1994, he recommended 10-12 grams of Vitamin C per day, which is on par with what other animals can produce by themselves. He also linked Vitamin C to lipoprotein-a, the levels of which in your blood have been linked to cardiovascular disease. You can read more about nutrition and research at the Linus Pauling Institute, located at Oregon State University.

What Else? What Next?

As much as you might try to be healthy, concerns over dis-ease can still come up.  This is where constitutional homeopathy comes in.  This means we would sit down for a couple hours, find out what about your chief complaints and other important things about you.  A homeopathic remedy is then chosen to match the symptoms you are currently experiencing.  With the right remedy, which is like a reminder to the body how to fix what is wrong, you will begin to improve.  To learn more, read through more of the blog posts. To really improve your health, you can’t go wrong with homeopathy!